Fans last season had a good chance to catch some extra hockey if the Wolves and Wild were playing — of the 10 games between the teams in 2013-14, six of them went beyond regulation (two to overtime, four to the shootout).

8 – Games since the Wolves have played an opponent outside their division, dating back to Oct. 11-12 against Charlotte; starting with this doubleheader in Iowa (a 2013-14 Midwest Division member), Chicago will play its next six tilts against West and North Division foes. With what seems like a different leading scorer every game, the Chicago Wolves aren’t having any drop off when John Anderson is mixing in players on different lines. Terry Broadhurst is a perfect example of that.

After cracking the lineup in the first weekend of the season, Broadhurst was given back-to-back games off before roaring back to tally five points in six games. He’s also currently on a four-game point streak and two-game goal streak to start the road trip.

After recording 44 points with Rockford last season, the Wolves are thrilled to have an additional scorer up front who is already making an impact. Broadhurst will look to keep his streak alive against the most goal-generous team Chicago will have played thus far. 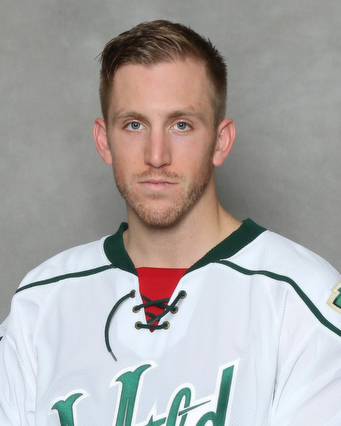 The former Chicago Wolves center will face off against his old team for the first time since he departed following the 2012-13 season. In two seasons wearing the burgundy and gold, Schroeder recorded 33 goals and 44 assists in 118 games.

His 2013-14 season with Utica and Vancouver (NHL) was injury prone and saw just 25 games with the Canucks and two with the Comets. He’s making up for his lost time, starting the season with 11 points in 10 games. Schroeder exploded for five assists in the Wild’s first three games but has since slowed down over his recent three games played.

The Wolves will only help themselves by keeping Schroeder from finding the back of the net to leave Wells Fargo Arena with yet another win on this nine-game road trip.