Following their 4-2 win over Iowa last night, the Wolves look to collect another victory this afternoon in game four of their nine-game circus road trip; if Chicago triumphs in today’s matinee, it will be its first winning streak of more than two games for the team this season.

5 – American Hockey League teams with a .700 or above winning percentage through the schedule on Nov. 8; of these teams, all are in the Western Conference and three are in the Midwest Division, including the Wolves (.727).

34 – Shots allowed by the Wolves on Saturday night against Iowa, a season high; the team has allowed 30+ shots in two of its last three games (Nov. 2 at Milwaukee and Nov. 8 at Iowa) after surrendering 29 or fewer in the first eight games of the season.

2 – Games without a power-play goal for the Wolves, tying a season-high, who went 0-for-2 on Saturday night; Chicago has faced disciplined teams in Grand Rapids and Iowa over the past two games, having had just four power-play opportunities in that stretch.

After a shaky start to the season, Jordan Binnington has won each of his last two starts, surrendering just one goal in each game.

The comfortability looked to be there in each of those starts, making big saves and help keep the Wolves in games after giving up six goals in each of his first two starts. Binnington is continuing to make his case for why he deserves to carry the load this season, and another big win on the road will help state his case.

Fellow goalie Matt Climie got pelted with shots in game one against Iowa, saving 32 of the 34 shots he faced. If Binnington can sustain a potential night like that, he will lead the Wolves to their first three-game winning streak of the season. 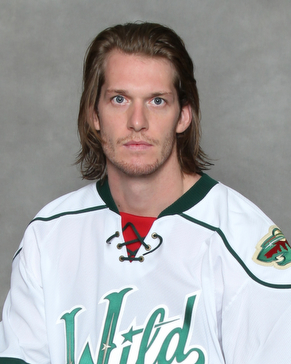 Hagel and his linemate Zack Mitchell led the Wild in game one against the Wolves, as the only two players with a goal and an assist. It was Hagel’s second multi-point game of the season.

The right wing is currently on a two-game goal and point streak, and seemed to be in the right place at the right time in game one last night. His lone goal was a pretty one-timer off a deflected pass that beat Climie top shelf.

While Iowa has struggled to find a win as of late, Chicago needs to keep its foot down and beat the teams it should beat. Icing Hagel’s streak will only help the Wolves find that end result and earn their first three-game winning streak of the season.

Twitter
#WolvesScavengerHunt Week 1 has ended with five more winners! While Keri (Chicago), Steven (Grayslake), David (Sch… https://t.co/UbWyTGqSwQ
Retweet Reply
No. 24 on our Top 40 Goal-Scorers Countdown, presented by @jewelosco, was born in Oak Park and took flight for perh… https://t.co/66Bj9XOojp
Retweet Reply
On the recommendation of Friend of the Program @LaurenceWHolmes, we encourage everyone celebrating #MLKDay2021 to w… https://t.co/gp4gxteZec
Retweet Reply
Have you enjoyed this week's Life Under The Pandemic podcast yet? It's chock-full of hockey goodness as @theshaves… https://t.co/Hfxj3yVITv
Retweet Reply
Skates received a new set of pens and pencils for the New Year. Now he seeks more pen pals so he can put them to go… https://t.co/vYvHR1SeQs
Retweet Reply