The Chicago Wolves renew their heated rivalry with the Rockford IceHogs in game two of the Illinois Lottery Cup seasonal series.

+19 – The Wolves have outscored their opponents 61-42 this season, which shares the AHL lead for best goal differential with the Manchester Monarchs. Chicago’s 61 goals share second in the league with Springfield behind Bridgeport (62).

20.5 – The Wolves came up empty on their four power-play opportunities Saturday night against Iowa, which dropped their conversion rate to 20.5 percent (16 of 78) and knocked them down from fourth into seventh place on the AHL rankings. They continue to pace the five Midwest Division teams on the power play. McRae is coming off a big night where he tallied an assist on the first goal of the game for the Wolves and more importanly the game winner.

After recording just three points in the first seven games, McRae has gone on to average a point per game over the next eight. McRae has been centering the lines of several different looks for the Wolves this season, but has seemed to find his niche with Shane Harper and Benn Ferriero. He’s already approaching his season totals from 2012-13 with the Peoria Rivermen in just a third the amount of time.

McRae could continue to be an essential part of this talented Wolves roster, and don’t be surprised if you keep seeing him crack the scoresheet. 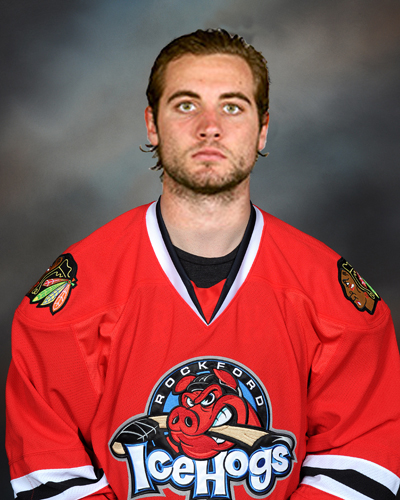 With players moving up and down in Rockford, Brennan has been a rock for the IceHogs on the blue line over the past month.

After a slow start to kick off the 2014-15 season, Brennan has found another gear as he’s recorded a point in nine of the IceHogs’ last 10 games. In all, he’s tallied 12 points in those nine games — three goals and nine assists. He has a team-best 12 plus-minus rating and also leads in shots on goal with 49.

Just two of the last 12 goals given up by the Wolves have been to a defenseman, and one of the four goals tallied by Rockford in the two teams’ first matchup were surrendered to a blue-liner. The Wolves need to throw some cold water on Brennan to help even this series up at one apiece.