In the week leading up to this episode, we probably discussed four times whether Kelsey’s well-acted-out panic attack would cause Chris to keep her or let her go! If it was up to us, we would say, LET HER GO, CHRIS! She is not only terrifying, she is crazy. We don’t even want to know what she would do on a farm in Iowa.

Before Ashley I. started to talk/cry, we both predicted that she would have some sort of emotional episode pre- or post-ceremony. DING! Two points for the Pistols!

OH NO, Chris, WHAT WERE YOU THINKING! We are so disappointed in Chris for giving Kelsey the final rose. What is wrong with him? Granted, the other two girls (Samantha and MacKenzie) were not the best, but anyone was better than her! FYI: The Black Widow nickname given by Carly is what we will be calling Kelsey from now on. It’s perfect.

This place will now be known as “The Awkward Photos of Chris” episode. We loved this necessary gang-up on Kelsey. Very smart of the girls to make it 3 vs. 1. It also just confirmed that Kelsey knows how to cry on demand and that she loves herself – a lot.

One on One Date with Becca

YES! We noticed on this date that ABC could change a boring situation (riding horses and not talking) and make it very exciting with the music choices. Poor Becca kicked off the dates that clearly resemble Chris’s actual life in Iowa as well as the date where Chris showed America his annoying laugh (although sex guru clearly still ranks as the worst date EVER).  Oh, we just love Becca. We predict she will be a top contender from this date on! 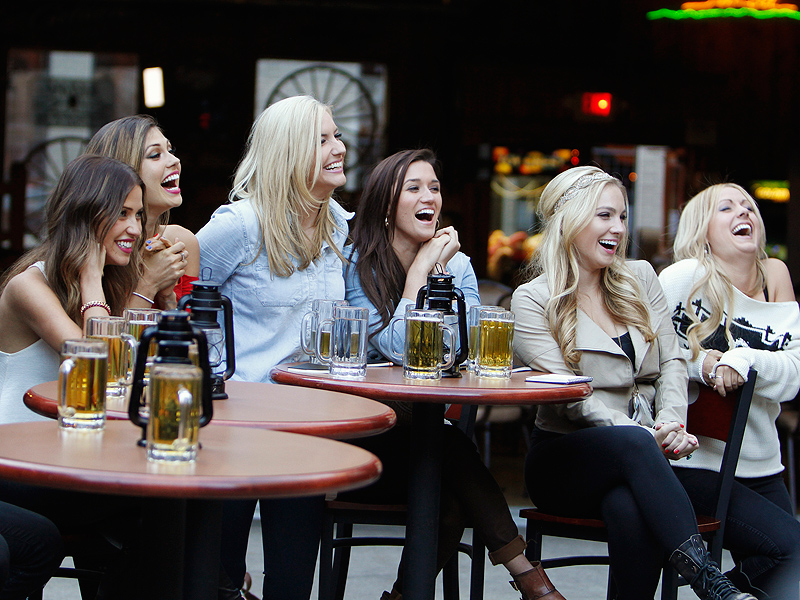 Chris has the girls (Britt, Carly, Jade, Kaitlyn, Megan and Whitney) writing country music with Big & Rich. We are so relieved that the girls recognized these two men because we sure didn’t. We knew that Britt would start to annoy us more and more after the glitter-in-bed reveal last week. We both just feel different about her.

We noticed the beer all around during this episode and then, when we realized what they really had to do, we totally got why everyone was drinking as much beer as they possibly could. We vote Kaitlyn for having the best song for many reasons, but most importantly it was the only song that didn’t make us look away due to excessive second-hand embarrassment.

The second Chris and Britt started to ‘run away,’ we couldn’t help but feel so bad for the rest of the girls on the group date. They are on a couch watching their boyfriend run away with another girl, and it doesn’t help they are in Deadwood, South Dakota. How did Chris expect all the girls to react when he walked into the room hand-in-hand with Britt…and she had a rose in her other hand? Thanks for leaving immediately, Chris, and letting the viewers experience the complete awkwardness.

Genius pairing for good TV! Kardashian wannabe Ashley I. and the Black Widow…what more could we ask for? Of course, Ashley I. is wearing a crop top and the Black Widow is wearing an outfit fit for a safari. They probably should have chatted about attire before they left the house. We wonder who broke up the 30-second silence between the three of them — the producers?

Also, why does Ashley I. feel like she has to make out for a long time before words even come out of their mouths, all while they’re sitting on a hill? If the Black Widow really is a guidance counselor, she has the soft calming voice down to a science. Ashley I. is the perfect girl to completely ignore the Black Widow’s devil stare and to stand up to her! For the five seconds we liked Ashley I., she completely ruined it by running up to Chris while crying and acting mad when she was really terrified to be alone with the Black Widow. Best scenario on this date happened: both girls are gone!

Best moment of this episode: Ashley I.’s walkaway fake-out and then her mixture of sobs and laughs all in one interview.

We get TWO DAYS of this wonderful show next week. Get ready!

Don’t forget! Let us know what you guys thought about the episode and our recap on Twitter at @PistolPat20 and @MrsPistol12. Leave us your final three predictions, and if you are right, you’ll have a chance to win a Pat Cannone Prize Pack!