By claiming the extra point last night, the Wolves jumped from ninth to eighth place in the Western Conference with 60 points while the Rampage stayed in sixth with 63 points. 3 – The Wolves have failed to score on the power play in three consecutive games, which is a bit of a misleading statistic because Oklahoma City set a Wolves opponent record on Feb. 13 when it didn’t commit any penalties. Chicago has failed to convert its last seven power plays at home over the last two games, which includes three chances on Saturday night against San Antonio.

22 – Rookie forward YANNICK VEILLEUX turns 22 today, which makes this his golden birthday. He’s the fourth and final February birthday on the roster.

It seems as though whenever a clutch moment is needed, “Pistol” has been the surefire guy to step up.

Saturday night’s overtime game-winner was Cannone’s second in the last ten days, as he also delivered the deciding blow in similar fashion against Milwaukee on Feb. 11. Both goals finished their respective games in the final 1:30 of overtime as well. His one goal and one assist last night made it his 10th multi-point game of the season — which is by far the most during a season in his career.

The chemistry between Cannone, Shane Harper and Terry Broadhurst continues to shine bright and is what will be needed down the stretch to clinch a playoff berth. 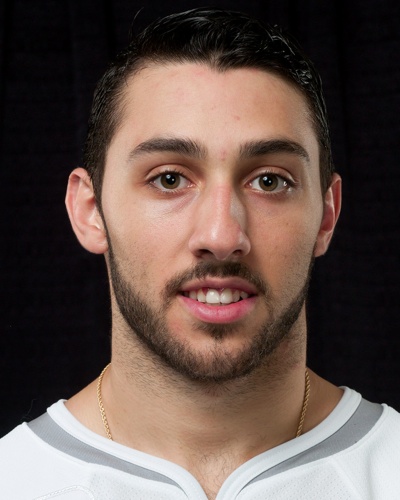 Trocheck may have been kept off the scoresheet in the first matchup last night, but that didn’t mean he didn’t have multiple chances.

After starting the first eight games of the season with the Rampage — totaling two goals and four assists — the 21-year-old center got the call to the big show with the Florida Panthers. In 28 appearances and his second NHL stint in as many years, Trocheck produced four goals and nine assists with a +6 plus-minus rating. Since his return to San Antonio in late January, he has four goals and seven assists in 13 games and five of them multi-point performances.

The expanded NHL experience towards the beginning of the season favored Trocheck well, and he’s feeding off that on a nightly basis with teams at his mercy. The Wolves hope to keep Trocheck in check again today.

Twitter
Happy #GivingTuesday ! Fans who make a $50 or more tax-deductible donation to Chicago Wolves Charities will be inv… https://t.co/qnbAg72A25
Retweet Reply
Finish off your #CyberMonday with a FOREVER FAN 4 PACK! You'll get: 🎟️ 4 Tickets 🌭 4 Hotdogs 🥛 4 Sodas 🍿 1 Bucket… https://t.co/qmXtemaNs2
Retweet Reply
Who comes in at No. 30 on our Top 40 Goal-Scorers countdown, you ask? None-other than @Cali_Sharp! Check it out,… https://t.co/UAyWHLe5tN
Retweet Reply
🚨LAST CHANCE🚨 Only a few hours left to save 25% on all orders with code CYBER through 11:59 p.m. CDT. Best gifts… https://t.co/tIuFE2YBEI
Retweet Reply
ONLY A FEW TICKETS LEFT Don't miss out on your chance to win @rduke96's game-worn burgundy jersey! Each ticket is… https://t.co/EnizBqBb5t
Retweet Reply