Beau Bennett was born and raised in Southern California. It’s where he learned the game he loves and the values he treasures – and he’ll never abandon the latter even if it affects the former. 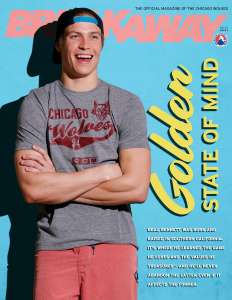 When Beau Bennett was a tyke, the house next to his family’s home in Gardena, California, fell into foreclosure. When nobody stepped forward at the public auction, Kirk and Louanna Bennett, Beau’s parents, swung into action and purchased the property.

The Bennetts viewed it as an investment – in their children.

Kirk, an independent contractor, built a Sport Court on the property’s back yard. As Wade, Beau, Shane and Bailey Bennett grew up, the hockey nets, basketball hoop and tennis court called their names every day – but mostly the hockey nets.

While it wasn’t the point of the Sport Court, Beau developed into the highest-selected native Californian in NHL Draft history when he went 20th overall to the Pittsburgh Penguins in the 2010 draft.

Beau’s in his sixth year as a pro and his first with the Chicago Wolves – for whom he has stacked up 10 goals and 30 assists in 47 games. Wade, his older brother, spent two years in the British Columbia Hockey League before playing briefly in college. Bailey’s wrapping up her freshman year at Colgate University, where the Raiders have reached the first NCAA Frozen Four in school annals.

“We wanted to have an environment where they could invite their friends over and be outside and have fun,” Kirk Bennett said. “But our rule always was, ‘If your homework’s not finished, you can’t go out to the Sport Court.’ And I told them if you ever break your stick because you’re angry, I will NEVER buy you another stick.”

“In terms of hours put into a sport, I put hundreds of thousands of hours into roller hockey,” Beau said. “I would wake up early for school. I’d go out there from 7 to 8, go to school, come back and go out there from 3 to 5. I just enjoyed it a lot. I didn’t do one private lesson growing up. Zero. My parents never made me work out. Never made me skate.

Kirk remembers taking Beau to local rinks on weekends and they’d stay for 7-8 hours without Beau ever taking off his skates – that’s how much he loved the sport. Just as fondly, Kirk remembers the rides home when they’d talk about some of the players he’d just faced and Beau would say, “Oh, Dad, how about that No. 22?” or “That goalie was sick!” or otherwise spreading the love and praise around.

“As a parent, you always want your kid to be a good person,” Kirk said. “He’s just a kind person.”

At 26, Beau Bennett has grown into the person who remembers being a little kid who was treated well by older hockey players, so he tries to pay those feelings forward. With social media such an omnipresent part of today’s world – and Beau possessing 53,000 Twitter followers (@BeauBennett19) and 19,000 Instagram followers (@beaubennett8) thanks to his witty, self-deprecating posts – that’s where he does most of his outreach.

“I don’t do it for attention or anything,” he said. “I just like to interact with people. If I was growing up and one of my favorite players interacted with me either through tweeting or direct messages, I would have loved it. I try to keep that going.

“I get a bunch of direct messages from groups of hockey fans. They’ll add me to their group and I’ll just jump in every so often and say, ‘What’s up, guys? How you doing?’ and they love it. It takes one second to make someone’s day, so I just try to do that.”

There were periods, though, where Bennett either deleted or ignored his Twitter account because he was told it might be better for his hockey career if he tried not to be himself.

“Being the California kid, I always get a bad reputation because the way I act – having fun or smiling – makes it seem that I may not care as much,” he said. “It’s not the case. It’s just that you have to enjoy what you do. I feel like I play the best when I’m having fun and enjoying what I’m doing.

“People are looking out for me (when they tell me that). But, honestly, I will regret more looking back and being, like, ‘Wow, I literally just sleptwalked through the last 20 years. Now I’m 40 and I wasn’t myself.’ I’m just trying to make every day and enjoy it. That’s the key to happiness.

“I love where I live. I love having that carefree mentality. Wearing sandals. Enjoying the sunshine. I’ll never change that. And I’ve been told to change that, but I just won’t.”

Who can blame him? If every person in the world was asked to provide a 45-second video summing up a great day in their life, then it would be hard to top Bennett’s clip from July 1, 2016, that can be found on the internet (vimeo.com/173186925).

Entitled “Stanley Cup 2016 – Manhattan Beach,” the video opens with Bennett and dozens of friends standing on the beach – many of them holding red Solo cups while clad in board shorts or bikini tops. They’re facing the Pacific Ocean and the sun on a crystal-clear day while Bennett holds the Stanley Cup above his head. As the camera pulls back over the water, you see gentle waves lapping at the shore and beautiful homes overlooking the beach.

Bennett earned his day with the Cup after helping the Pittsburgh Penguins win it all in 2016. He opted to share his spoils with as many people as humanly possible – starting at the Toyota Sports Center in El Segundo where he welcomed anyone who wanted to take a picture with the Cup. From there, the Cup (and the celebration) moved to the beach and several other spots.

“I was lucky enough to get it first,” Bennett said. “It was coming to our owner (Beverly Hills billionaire Ron Burkle) next. It was a chance to celebrate with people I hadn’t seen in years. So that beach party we had was all my friends that I grew up playing with. People flew in and there were about 200 people on the beach.”

As part of the beach bash, Bennett and his friends held a volleyball tournament to “win” the Cup.

“Then we took it to my family’s house (10 minutes away), which was more my parents and all the coaches and hockey families,” Bennett said. “We had 100-150 people there. Then we took it to the bar. Shellback Tavern is like our watering hole. That was our day and it was great to have it because it was something to rally around to get back together with all these guys I hadn’t seen for so long.”

The fact that Bennett didn’t get his name etched on the Cup – he endured another injury-plagued season that limited him to 33 regular-season games and 1 game in the Eastern Conference Finals – didn’t bother him. Neither did the subsequent jokes that played off Bennett’s unfortunate lengthy history of injuries.

One wag found a picture of a wheelchair-bound person wrapped like a mummy in a hospital hallway – and used Photoshop to make it look like the person was holding the Stanley Cup on his lap. The comic even added a fake Sidney Crosby autograph to his leg.

Bennett promptly tweeted it out with the caption: “Someone sent this to me…I think the world needs to see it.” Another jokester took a photo of an ambulance that was part of the Stanley Cup celebration procession through Pittsburgh’s streets and captioned it: “Beau Bennett had his own truck for the parade.”

Bennett got a kick out of sharing that joke, too, just as he did when The Tonight Show’s Jimmy Fallon lampooned him during the 2014 Stanley Cup Playoffs. They showed Bennett’s official NHL headshot with his trendy haircut and listed him as “Most Likely To Get A Penalty For Frosting Tips.”

As always, he’s up for anything that helps anyone enjoy the day.

“I know people enjoy it because I’ve had people say, ‘I know you make fun of yourself, so it helps me go through what I’m going through,’ ” Beau said. “So whenever someone tells me to stop, I’m like, ‘I’m helping people in their daily lives so I’m going to keep doing what I’m doing.’ ”