Last Man Standing is Usually How it Works

Home | News | Last Man Standing is Usually How it Works

All of the videos have been watched and spliced and watched again. The scouting reports have been written and discussed and memorized.

All of these things have made for a palpable buzz this week throughout the Chicago Wolves’ practice facility in Hoffman Estates. 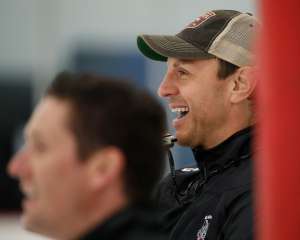 “It’s not another week,” said Chicago  Wolves head coach Rocky Thompson. “It’s different. Everything ramps up. It’s the narrowed focus. All you’re trying to do is everything you can today to get to the next day. You’ve got to put everything you have into it.

“That’s what the playoffs are. It’s a grind. But it is high-octane. The gas is to the floor. Last man standing is usually how it works. Whoever can endure that the most gets an opportunity to be successful in the end.”

“That’s what the playoffs are. It’s a grind. But it is high-octane. The gas is to the floor.” – Coach Rocky Thompson

Chicago Wolves. Rockford IceHogs. Two long-time rivals whose rinks are located exactly 73.5 miles apart. Only one team gets to continue its pursuit of the 2018 Calder Cup – and that team’s identity will start to be determined at 7:10 p.m. on Saturday, April 21, at Allstate Arena.

Need a hint as to how tight this best-of-five Central Division Semifinals figures to be? The Wolves and IceHogs split their 12 games this season. They’ve split their 60 games over the last five seasons. In fact, they’ve split their 124 regular-season games since Rockford joined the American Hockey League prior to the 2007-08 season.

There’s just one difference in the teams’ The only other time the Wolves and IceHogs met in the playoffs, Chicago needed seven games to take out Rockford in the 2008 Western Division Finals on its way to the Calder Cup championship. 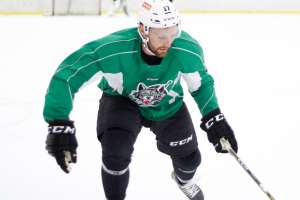 While the Wolves and IceHogs are playing for the American Hockey League’s top prize, you’ll be forgiven if you think their games feature the NHL’s level of skill and investment. 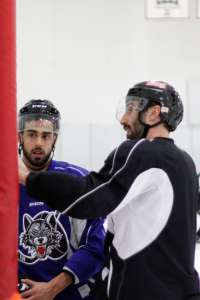 But the players won’t be thinking about their resumes and their career achievements as they sit in their respective dressing rooms in the moments before Game 1. They’ll be thinking solely about how to get that 1-0 lead for their side.

“I won’t have to say anything,” Rocky Thompson said. “I go in and I give them the starters and I trust them. The work is done. The preparation is done. And they’re excited and they’re ready to go. And then I open the door.”

“…I trust them. The work is done. The preparation is done. And they’re excited and they’re ready to go.”