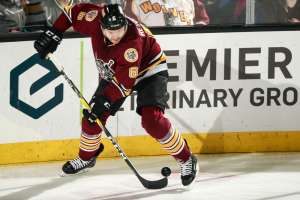 Joining the 25-year-old Lagace — who appeared in 16 games for the Golden Knights during the regular season — are forwards Cody Glass, Keegan Kolesar, Stefan Matteau, Brandon Pirri, Nick Suzuki and T.J. Tynan as well as defensemen Jake Bischoff, Jason Garrison, Nicolas Hague and Griffin Reinhart. All 11 players will practice with Vegas through the remainder of the playoffs.

Lagace appeared 23 games this season for the Wolves — only Kasimir Kaskisuo appeared in more (29) — and compiled a 14-5-2 record along with a 2.84 goals-against average and .905 save percentage.

Glass, Hague and Suzuki joined Chicago following the conclusions of their respective junior seasons. The 19-year-old Hague was the earliest arrival and recorded an assist in his professional debut on April 7 against the Milwaukee Admirals. Glass and Suzuki came to Chicago on April 17 and 20, respectively. Suzuki appeared in Game 3 of the Calder Cup Central Division Semifinals against the Rockford IceHogs on April 26 to mark his first pro game. Glass did not see game action with the Wolves. 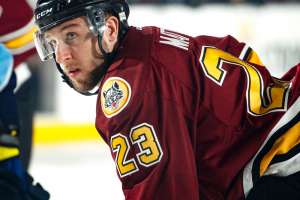 Veterans Garrison, Matteau and Pirri only appeared in a combined 18 NHL games during the regular season, but skated in 175 combined AHL games for the Wolves. Pirri — with Teemu Pulkkinen — led Chicago in goal-scoring with 29 markers. The 33-year-old Garrison led a young D-corps with 28 points (8G, 20A). Matteau finished the year as one of four skaters to collect 15 goals.

Bischoff finished the season as Chicago’s top-scoring rookie with 23 points (7G, 16A) — 10 points better than the next-best first-year, Kolesar. Reinhart was a mainstay on the Wolves’ roster as he appeared in 60 games.

The Golden Knights look to take a 3-2 series lead over the San Jose Sharks Friday night at T-Mobile Arena in Las Vegas. Puck drop is set for 5 p.m. CT and will broadcast on NBC Sports Network in the Chicago area.