The Chicago Wolves announced Thursday that forwards Ryan Wagner and Matthew Weis have signed standard player contracts with the team for the 2018-19 season. 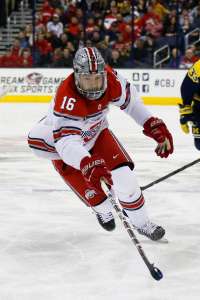 The 22-year-old Weis comes to Chicago after four seasons with the Ohio State University Buckeyes. The New Jersey native averaged a point per game through 37 contests in his senior season. When the Buckeyes appeared in the Frozen Four and fell in the semifinals to the eventual national champion University of Minnesota Duluth, Weis was forced to watch from the stands with a season-ending injury.

Prior to skating at OSU, Weis spent three seasons in the United States Hockey League — part of one season (2011-12) with the Corpus Christi IceRays and two-and-a-half (2011-14) with the Green Bay Gamblers. In the USHL, Weis skated in 147 games and collected 112 points (42G, 70A). He was also a member of the 2012 Clark Cup-winning Gamblers — a team that also featured former Wolves defenseman Jordan Schmaltz. 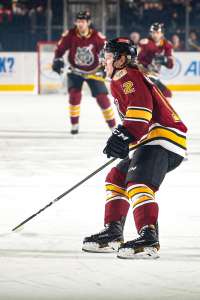 Weis twice represented the United States in international play. He helped Team USA win gold at the 2013 World Junior A Challenge. Weis kicked off the 2012-13 season with the U.S. at the Ivan Hlinka Memorial Cup.

Former University of Wisconsin standout Wagner will return to the Wolves next season after skating in seven games during the 2017-18 campaign with the team. In his professional debut on March 9, the the 22-year-old recorded his first pro point, an assist.

Wagner, a Park Ridge, Illinois, native who attended Maine South High School, finished his senior season at Wisconsin as the team’s leading scorer with 33 points (15G, 18A) in 37 games. He also earned the squad’s Spike Carlson/Chris Chelios Most Valuable Player award. During four seasons with the Badgers, Wagner skated in 143 games and registered 88 points (36G, 52A).

The 5-foot-8, 185-pound Wagner was a one-year member of USA Hockey’s National Team Development Program then-based in Ann Arbor, Michigan. During the 2013-14 campaign, Wagner played 49 games and collected 13 points (6G, 7A). He joined the NTDP from the Chicago Mission Minor program.