“Chicago is without question one of the strongest, most passionate hockey communities in North America,” McPhee said. “This is a relationship that we truly believe will be mutually beneficial.”

After the first full year of this partnership, the whole world knows how things are working out for Vegas (hint: you can watch the Golden Knights play Game 3 of the Stanley Cup Final against the Washington Capitals Saturday night on NBC).

But it’s also important to note how well the first year worked out for the Wolves. Not only did eight Wolves players spend time helping Vegas break all the professional records for expansion-team success – and 11 Wolves have been a part of the team during the Stanley Cup Playoff – they and the rest of the Wolves enabled Chicago to be the only American Hockey League team to repeat as division champions in 2017-18. 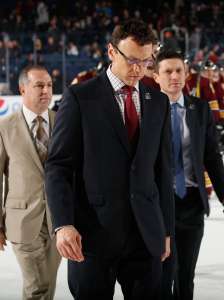 “I think it was a very good year,” said Wolves head coach Rocky Thompson. “I think there were a lot of positives within this year building our team, our culture. We did exit meetings with the players and from what we understand, everybody wants to come back if they can’t start next year in the NHL.

“They loved the Wolves, the organization and the culture we had – which is so important. If you’re ever going to have success, you’re going to want people to be a part of your culture. We were able to achieve that.”

As one might expect of a team with a new coaching staff and an 80 percent turnover rate on the roster, it took time for the Wolves to build their culture and stack wins. It also didn’t help the Wolves – though it helped their partner – when injuries to Vegas goaltenders Marc-Andre Fleury and Malcolm Subban meant the Golden Knights tabbed Wolves goaltenders Max Lagace and Oscar Dansk to replace them.

Lagace and Dansk handled nearly all of Vegas’ goaltending duties from Oct. 21 to Dec. 9 – during which time the Golden Knights posted a 14-8-1 record to stay near the top of the NHL’s Pacific Division.

“That’s probably the turning point in the season when we weathered that storm,” Vegas head coach Gerard Gallant told the Daily Herald in January. “Within the culture in the room and the great job our players did with the leadership,” Thompson said, “we were able to dig ourselves out of a situation that very few teams have ever been able to do and give us home ice for the playoffs.”

Veterans Paul Thompson, Brandon Pirri and T.J. Tynan led the way with their play and their guidance – but the Wolves’ success was built with great depth that enabled Thompson to count on all of his forward lines and defensive pairs every night.

Rocky Thompson can recite stat after stat to prove the Wolves’ strength. Goals for and goals against when playing 5-on-5. Power play (11th in the league) and penalty kill (12th). Shots for vs. shots against.

Neither he nor anyone else in the Wolves camp envisioned the postseason ending so soon, but Thompson tipped his cap to the Rockford IceHogs for their showing in the Central Division Semifinals.

“I just feel like going into the playoffs, we had a great opportunity,” Thompson said. “Obviously the Rockford IceHogs did a good job. At the end of the day, we weren’t able to do what we wanted to do. It always makes you feel disappointed. With our group and how close they were and how much they cared for each other and how hard they played for one another, that can be the recipe for success and a championship.”

How will the Wolves look in 2018-19? There are several players under contract including T.J. Tynan, Tomas Hyka, Keegan Kolesar, Jake Bischoff, Zac Leslie, Tyler Wong, Ryan Wagner, Reid Duke and recent signee Matthew Weis. Vegas draft picks such as 19-year-old defenseman Nic Hague, who stood out after joining the Wolves late in the year, and 18-year-old Sweden native Erik Brannstrom should be in the mix.

There are a bunch of restricted and unrestricted free agents who could return to the fold as well. In short, the Wolves are building for back-to-back-to-back championships while continuing to help Vegas challenge for Stanley Cups.

“I loved my group,” Thompson said. “I’d work with any one of those players going forward. I thought they were outstanding and we had a team that I felt could have contended for a championship.”