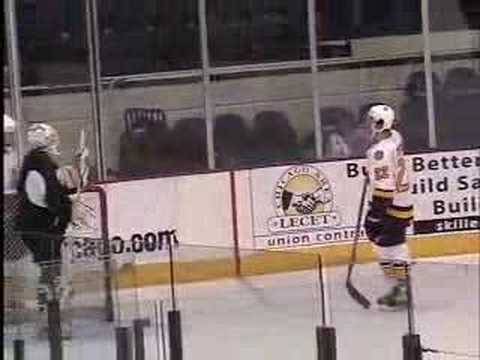 The challenge began at 6:18 p.m. on Wed., Dec. 19 when the two dressed for the Wolves game vs. the Peoria Rivermen. Twenty seven hours, a 7-4 victory, several bottles of Febreeze and countless confused stares from passersby later, they were finally free to shower at 9:18 p.m. on Thu., Dec. 20.

“I didn’t think I was going to make it,” said LaVallee. “Around hour two I was already feeling the pressure, but I pulled through. The hardest part was definitely the skates, I couldn’t feel my toes for most of the afternoon. Our fans have been incredible for us and we really appreciate them all coming out today and making this a success.”

“It was long, tough haul but it was a fun day,” said Oystrick. “It was great to see so many people come out and support us, and we’d like to say a big thanks to everyone that pledged money for our charities.”

The pungent pair made several stops throughout the course of the day Thursday, including a live appearance on FOX32’s “Good Day Chicago”, and visits with fans at Gino’s East in Chicago and Applebee’s in Arlington Heights.

“The guys were both really troopers,” said Wolves Vice President of Operations Courtney Mahoney. “As always, our fan support was amazing and helped to make the event a success. This was something brand new for us and we went way beyond our goals, so we’re very excited about the outcome.”

In spite of the positive reviews, don’t expect Oystrick or LaVallee to be attempting to break their own record any time soon.

“We’ve done it once and that’s enough for me. If someone wants to try and beat our record, I say be my guest,” said LaVallee.