The View from First Place

The Chicago Wolves’ magic number to clinch a Calder Cup playoff spot has dropped to 2. The Wolves have owned the Central Division lead since Thursday, but the Manitoba Moose and Grand Rapids Griffins aren’t going to let the Wolves capture their second consecutive division title without a fight.

In short, the Wolves know they still have plenty of work to do – even though there are just six regular-season games left.

For example, starting with Saturday’s 7 p.m. game against the Milwaukee Admirals at Allstate Arena, the Wolves need 10 points in those last six games to assure the Central Division crown and home-ice advantage during the first two rounds of the playoffs.

That would be playing at a .833 points percentage clip, which isn’t far off from the rate at which the Wolves have played since early December (.740). “I think it’s just been a growth over time,” said Wolves captain Paul Thompson. “Our game has been growing in the right direction all year. That’s kind of what you want from start to finish, right? You want to get better as a team. We’ve worked our way to a pretty nice spot here and we hope we can finish strong.”

“Our game has been growing in the right direction all year. That’s kind of what you want from start to finish, right? You want to get better as a team. We’ve worked our way to a pretty nice spot here and we hope we can finish strong.” – Paul Thompson

That’s as close as any Wolves player will get to pounding his chest over this development. Basically, they’re not all that impressed with themselves right now – just as they weren’t interested in giving up on themselves four months ago when they ranked 30th among the AHL’s 30 teams.

For those who’ve forgotten, the Wolves woke up on Dec. 6 with a .357 winning percentage. Not only was that the worst in the league, they were already 21 points behind the Central Division-leading Manitoba Moose. How did this happen? Wolves head coach Rocky Thompson points to the players-only meeting that captain Thompson and others orchestrated in November – shortly before the transformation began.

“They were working hard and they weren’t getting rewarded for it,” said Rocky Thompson. “You can go one of two ways. Some players – and it’s human instinct – you start to give up because you’re doing everything you can and you’re still not getting the results.

“Basically, what came out of that meeting for me – and I never asked them what they said – was them essentially declaring, ‘We are not giving up. We are not going to give up.’ And as a staff, we weren’t giving up. We were hard. We were determined. We were working and we had a plan.

“And that plan was going to work out, but it was important that the players didn’t give up because no plan will work if you lose heart. They didn’t lose heart and their character was revealed in the most trying time of this season.”

It didn’t hurt that the Wolves’ collective character belongs to a collection of characters who know how to put the puck in the net – and know how to keep it out of their own net.

During their 48-game blitz over the last four months, the Wolves have averaged 3.35 goals per game while allowing just 2.29 per night. Four-year NHL veteran Brandon Pirri leads the way with 29 goals in 54 games – sharing fourth place among all AHL goal-scorers. 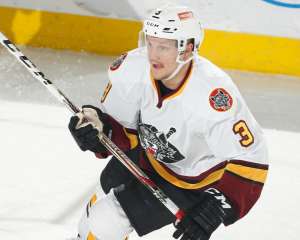 Teemu Pulkkinen, who led the AHL in goals three years ago, has reeled off 10 goals in the last 17 games and ranks second on the squad with 23 goals. Paul Thompson, who finished second to Pulkkinen in goals three years ago, has racked up 21 goals. AHL rookie Tomas Hyka averages nearly one point per game (15G, 27A in 44 games) while proven playmakers T.J. Tynan (56 points) and Beau Bennett (49 points) seem to hand out assists every night.

“We have a lot of good players who know how to score goals here,” said

Pulkkinen, whose slapshot has been measured at 100 miles per hour. “I had a bad stretch after Christmas, felt a little bit tired, but lately I’ve been feeling good and playing with energy. Here’s the thing: When you play good and get some points, you feel good about yourself and you get more energy. Right now, I feel pretty good.”